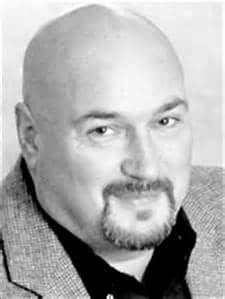 A show business veteran since the early 70’s, Bill has appeared on Dick Clark’s Bloopers and Practical Jokes and in radio and TV commercials. He regularly performs his comic routine at the Riviera Hotel in Las Vegas and at Michigan’s DTE Energy Music Theatre. Bill counts Jonathan Winters and Bill Cosby among his heroes. 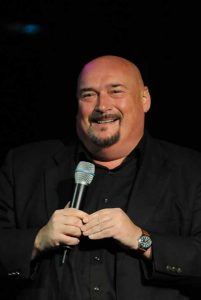 For the last six years, veteran Detroit comic Bill has been performing regularly in Las Vegas at the Riviera Hotel & Casino’s comedy club, but he still calls the Midwest “my orbit.” “This is where I like to live, and where I do most of my work,” he said.

When he was in high school, Bill performed Shakespeare with the famed Detroit Resident Artist Theater, a professional troupe that included comedian and actor Robin Williams. After high school he worked for a Detroit television station, then attended Eastern Michigan University on a broadcasting scholarship.

Following college, he somehow found himself working for an automotive supply firm in Brighton, where he spent 12 years and wound up as a vice president.

After starting a company called Haunted Systems, which built and supplied props for haunted houses, he began doing stand-up comedy.

His first paid appearance was with Rosie O’Donnell at the Mainstreet Comedy Showcase in Ann Arbor nearly 20 years ago. Since then he has worked steadily in clubs and in Detroit television, appearing with everyone from Drew Carey to Soupy Sales. He’s appeared on Dick Clark’s TV’s Bloopers and Practical Jokes, and in a number of TV and radio commercials.

Last year, he opened for the Doobie Brothers at the DTE Energy Music Theatre in Clarkston, Mich. 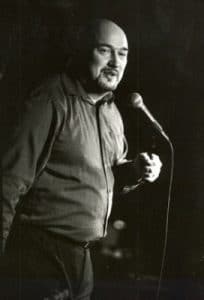 Over the years, Bill has shared some of his experience with younger comics through videos and classes on all aspects of succeeding in stand-up comedy

“There are certain things you do and don’t do,” he said. “Some of these younger comics want to be on the edge, they think that’s great, but I’ve got news for them: it’s already been done.”

Asked if he himself “worked clean” – that is, without heavy doses of profanity – he said it depends entirely on his audience.

“I can go either way,” he said. “I worked a church in Iowa, and then I did a stag for the Michigan Concrete Association in Fraser.

“I didn’t do exactly the same show for the concrete workers that I did for the church people in Iowa,” he laughed.

LOOKING FOR A GREAT NIGHT ON THE TOWN ?

Last Saturday, Bill who calls himself the “Funny Bald Guy”, put on quite a show for a packed house. Hildebrandt worked the crowd and mingled with the front row patrons as he covered topics from dating, bar pick-up lines and religious services. Bill works the crowd from the stage!

From The Detroit Free Press

LAUGH IT UP WITH A COUPLE OF PRO’S

Bill is ticked off.

Sure, he’s a comic, and laughmakers are supposed to be all friendly and whatnot — and he is, but he’s also peeved with what’s being passed off as good stand-up comedy on television.

Five minutes of TV fame does not make a good stand-up comic. It’s the ones who get down to the nitty-gritty and entertain a live audience for close to an hour who are worth their salt.

He and his buddy, Leo DuFour, have teamed up to prove it.

The two local headlining comics are giving it to you live and up close all month at Joey’s Comedy Club in Dearborn.

“The bottom line is, there’s a little frustration here. There are all these young comics from Detroit in their late 20s and early 30s and they’re moving out to California and occasionally they’re getting five minutes on Comedy Central,” Hildebrandt says. “And there are a lot of us old road dogs that have been doing this 20 years or so and haven’t had that kind of exposure.

“So big deal, they were on TV. Come out and see these two guys that have been around the country and have played at everything from shot-and-beer joints in Flint to Vegas.”

Bill and DuFour know how to interact with the audience and switch gears if they have to — giving a clean show or one that has some innuendo in it.

They serve as opening acts for musicians — Huey Lewis and the News, the Doobie Brothers and the Beach Boys. They do corporate functions during the holidays and country club stag parties in the summertime.

And they love it.

For this month’s performances, they’ll each take the stage for 50 minutes.

“Leo is so relaxed and polished and unhurried. Most of the stuff on TV, I listen to these guys and it sounds like they’re reciting to me,” Hildebrandt says.

OK, so according to Bill, TV comedy may not be all it’s cracked up to be. And no, that’s not coming from someone who’s never had a TV moment. Bill, a former auto supplier manager who once worked for Brighton’s Dick Chrysler, and DuFour have each been on Comedy Central.

“There’s a lot of guys out here who could blow the pants off of anybody I’ve seen on TV in the past 10 years,” he says. “But we’re just out here working. We’re just trying to make a living, make a car payment and keep the house going. Just because we’re not on Comedy Central, that doesn’t mean anything.”

Well, this month it does. It means folks can see the real thing live. And for less than the cost of cable.

Bill was great with our crowed everyone liked it so I am very satisfied!! I made it a point to ask a couple of people that normally bitch about everything and they even said good job. Thank You!
Tom H.C. – Corn Growers Association – Franklin Inn for about 200 Guests!

Hi Dean, All went well.  Bill was really good, lots of laughs.  We had About 150 Guests attend at the American Legion Hall. Thanks so much for your recommendation.
Karole  M. M.-T. Bowling Association  (Rusch Has booked Entertainment for this event since 1997- 20+ years of GREAT FUN)

Hi Dean!  Bill did a great job and everyone really enjoyed his show.   Thanks for recommending him and looking forward to working with you again next year.
Happy Holidays to you and your family!
Carmi C. – Home Builders Association – 200 Guests at Bucks Run Golf Club

I booked our corporate Christmas party with Rusch Entertainment, a DJ and comedian. Of course you are always worried – but I shouldn’t have as both were very good. We had Kim (DJ) and Bill (Comedian) and they were awesome! Kim started the evening with some Christmas carols/songs (5:00 pm) as were eating dinner and socializing – then Bill came on after dinner. He was so funny! Then Kim kicked it off with dancing until 11:30! Everyone stated they had so much fun and we look forward to booking with them next year! They definitely made my job easy.
Annie

Bill – The comedian was a ‘hoot’.   The DJ was good too, and I look forward to hearing from management when we have a scheduled meeting Tuesday.  I thought it went great.  Thanks Dean!
Annie S.

Dean,
Bill did a great job and read the room beautifully. I sort of anticipated it would go over well and it did.  I’ve received a lot of positive feedback and I think we have a new yearly banquet tradition: Comedian/Entertainer.  Thanks again for all your assistance with this matter.  100 Guests at the Ukranian Cultural Center, Warren  MI
Mike P.  the General Motors North American Golf League

We made the right decision to use Rusch entertainment for our retirement party. DJ Aaron and comedian Bill were both outstanding. They exceeded our expectations in every way. Bill got the party rolling with his hilarious narrative of life. He engaged the crowd, and had everyone laughing. The crowd was of varying ages and everyone loved him. We received so many positive comments. Everyone asking where did you find that guy? The “white Methodist ladies”, ” the stoner guy” and the “twentysomething guy” he used in his presentation was spot on. You would have had to be there to know what I mean. But trust me he was funny!

Aaron our DJ was so perfect, I feel his talents will take him far into the entertainment business. He articulates well. His presence is both professional and warmly sincere. He went out of his way to make sure the evening’s events proceeded the way we wanted them to. He not only played the music we wanted, he took care of our family. We didn’t have to ask him for anything. He contacted me before the event, to get a feel for what we wanted and then delivered a very fun night. On a scale of 1- 10, he is a 15!.

I recommend to anyone, if you want a perfect party, contact Rusch entertainment and you will have a night to remember!

Hi Dean
Yes. . .the crowd loved Bill.  We will be going with Dec 2, 17 next year!!  He was the Comic for the City’s Annual Employee Service Award Banquet   (Rusch Entertainment has been booking this party for 20+ years!!!)
Teresa  F.

Hi Dean, Bill delivered a fun night of entertainment!  The staff enjoyed his show and many have commented his material was clean and fun.  Thank you for the recommendation.
Thanks! S.W.,  IS Manager, H. Behavioral Health Comic / Entertainer for Employee Appreciation Banquet at the Ubly Fox Hunters Club for About 100 Guests!

Dean,   Bill was a big hit.  He kept everyone laughing and put on a good show.  I would use you and him again the next time we have a function and can’t thank the both of you for all you did.  I have had several people ask how we found him, and will recommend you every chance I can.
Sincerely, Dan B. – Comic/Entertainer for fundraiser for about 100 Guests The Moose Club

Hi Dean, Bill was a big hit.  He kept everyone laughing and put on a good show.  I would use you and him again the next time we have a function and can’t thank the both of you for all you did.  I have had several people ask how we found him, and will recommend you every chance I can.
Comic/Entertainer for fundraiser for The Moose Club – Sincerely, Dan B

Hi Dean,
Your Comic Bill did an excellent job at the Doherty Hotel  in Clare!! We really, really were impressed with him!  He was Excellent! Definitely would recommend him!
Thank you!
A. K.  – Human Resources Generalist – Life Sciences