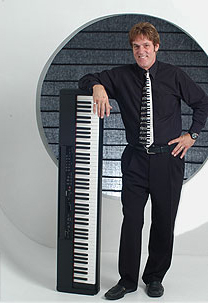 George plays keyboard, guitar, harmonica and also sings. The son of a Hammond B3 organ salesman, George got his musical start very early in life. As a child he would entertain the audience during intermission in the local theater by playing the organ.

George has produced five compact disc recordings. The first, entitled “The Seed” was completed in 1994 and was recorded in less than two hours. “The Seed” was picked up by major retailers in Michigan, including Harmony House, prompting some local success. George’s second effort, “Rhythm,” released in 1998, is comprised mostly of original music with instrumentation including the Hammond B3, drums, bass, guitar and piano.