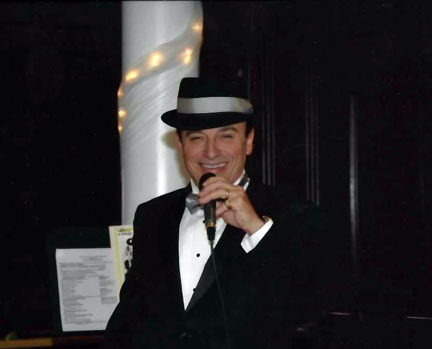 Bringing you the sounds of:

With appearances across the country including:

Along with many of us who grew up in the 60s and 70s, Gary first remembers listening to his parents’ Frank Sinatra records around the age of three. Most notably, the Christmas album and Sinatra at the Sands, which included such greats as Come Fly with Me, I’ve Got A Crush On You and Fly Me To The Moon.

Back in the late 80s, while hanging out in local clubs, Gary’s interest in music & entertainment began to grow. He started out by hosting Karaoke at Lido’s on the Lake in 1991, and over the next nine years developed his own act while playing various venues and functions.

Things started to really pick up in 2003. In January and through the summer, Gary appeared at Andiamo’s Osteria in Rochester and, from September 2003 through March 2004, he played at Rosebud’s in Shelby Township. Since then he has appeared at a number of venues around town, including Guiliano’s in Chesterfield Township, Gino’s Surf on Jefferson Avenue in Harrison Township, Andiamo’s, both in Warren and St. Clair Shores, Petruzzello’s in Troy, and Jack’s Waterfront Restaurant in St. Clair Shores.

In 2005, Gary began singing with One Beat Back, which is now called The Gary Greenfelder Orchestra. He met George Millsap, a trumpet player and arranger, who helped him get started with his own “book” of charts, which has currently grown to almost 100 songs. “George Millsap saw that I had the desire and was willing to work hard at doing this. He also had faith in my ability. I pride myself in being able to sing these charts, as they are all transcribed from the original artists’ recordings. In my opinion, the only way you are going to have a chance to sound like the original artist, is to duplicate this process. Through George, I was not only able to start and increase my songbook, he also introduced me to three bands in which I’m still a current member: Leo Rea’s ReaDea Big Band, The Tom Allport Big Band and Lynne Henry’s Swing Shift Orchestra. All three bands are very active in the Detroit area.”

Through the years, Gary has also established himself as a regular performer at numerous senior facilities in the area, such as Brighton Memorial Gardens in Northville and Sterling Heights, Pineridge Plumbrook and Hayes in Sterling Heights, Park at Trowbridge in Southfield, and Trinity Seniors in Ypsilanti. “Playing for the seniors is very important to me because you know they truly enjoy the music. Especially when you see some of these elderly folks who have beginning or advanced stages of dementia and still can sing along with the music. I really feel as if I’m doing something worthwhile, by bringing some joy to the elderly by doing this for them.”

Gary has also performed in theatre, playing Henry Ford in the jazz opera Murder at the Ford Rouge, at the Macomb Performing Arts Theatre in March 2010.