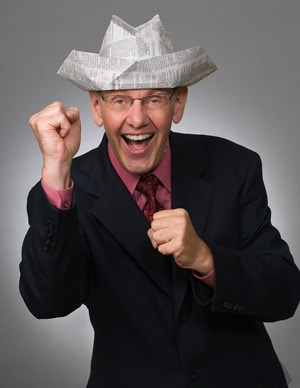 (Photo by SEAN PROCTOR) When a second grade boy is known to be best entertained by Angry Birds video games and the most complex Lego sets, it’s reassuring that a simple newspaper folding and cutting trick can elicit a big grin and outbursts of “That’s awesome!” and “That’s so cool!”

“Boys of about 8 are very ripe for magic,” Gene said, as he shared that he was eight when his fascination began. “Girls less so. I don’t know why. Most boys outgrow it. Luckily for me, I never did.”

Broader audiences will be glad he stuck with magic and will be entertained when Anderson appears as one of twelve acts on the bill for The Vaudeville Show on Nov. 10 at the State Theatre in Bay City. Gene is also producer, director and master of ceremonies for the show. And with his typical impish humor, he added: “And I sweep up after!”

Being master of ceremonies comes naturally for Gene, as he has played that role at almost every major magic convention in America. In the past year, he attended eight magic conventions and performed at four of them. He’s written a book for magicians called “Newspaper Magic” which is in its twelfth printing, and he’s currently writing what he calls his “legacy” book. He has performed magic in 21 countries and on six continents. He calls himself a part-time professional magician. He’s also a motivational speaker and a retiree from a 32-year research and development career at The Dow Chemical Co.

This month’s Vaudeville Show actually has its roots in Gene’s 2001 retirement.

“When I graduated from Dow, I had my own graduation party at Valley Plaza. The guest list ranged from the janitor in my building to the CEO of Dow, and both were there,” Gene said. “My good friend and fellow magician Stephen Bargatze flew in from Nashville and together with ‘Bay City Bob’ Bloenk we did a benefit show for the State Theatre. Now the theater has been beautifully restored. It’s even more glorious than it was in its heyday. After the restoration, we did our first vaudeville show there. This is now our fourth vaudeville show. It’s family friendly and squeaky clean. It’s not a kids’ show, it’s an everybody’s show. It’s a true variety show, a modern-day vaudeville show.”

It’s very appropriate to host a vaudeville show at The State Theatre, because it was built in Bay City in 1908 during the lumbering era as a vaudeville and burlesque house. It changed names several times, being known as the Bijou, the Bay and the Orpheum. In 1930, it was renovated to resemble a Mayan pyramid by C. Howard Crane, an architect who also designed the Fox Theatres in Detroit, Atlanta and St. Louis.

Headlining with Gene at the show are some of his hand-picked favorites:

• Stephen Bargatze has performed as a magician and comedian with top stars including Bill Cosby and Garth Brooks. He is from Nashville, Tennessee.

• Ebb N’ Flow is a collegiate champion barbershop quartet which was formed at Central Michigan University in Mount Pleasant.

• Madison Seliskar, 12, is the reigning “Little Miss Michigan” and will perform two theater jazz dance routines. She is from Bay City.

“A variety show should have laughs but a lot of oohs and aahs, too.” Gene said. “It’s theater It’s gotta be entertaining. You want to laugh and be baffled and have the kids say ‘cool’ and ‘awesome’. It should have appeal for everybody.”

Gene, in addition to serving as emcee, will show the crowd why he is known as a world expert in newspaper magic. His newspaper act usually runs 10 minutes. He snips the local newspaper into a five-point star, a Star of David, a peace sign and more, always accompanying his actions with lots of witty patter. “I’m a magician first, but I try to be funny, too. The newspaper act has funny stuff, but it’s mostly visual impact. I call it a verbal pantomime,” Anderson said.

Also in his act, he quickly folds and dons one of his creations, a changeable newspaper hat that starts as a mortarboard, flips into admiral and Napoleon hats, then a sombrero and finally a cowboy hat. “The hats aren’t exactly magic, but they’re pretty entertaining,” Anderson said. “People don’t wonder how I do them, they wonder how I do them so fast and so well.”

But his trademark act component, the one with which he closes, is the torn and restored newspaper. In this classical magical effect, a newspaper is torn to shreds and then visibly restored. “The concept of tearing a newspaper and putting it back together is the same concept as sawing the woman apart or cutting the rope apart and putting them back together. You’re creating the illusion that you can really do it,” Gene said.

In fact, Gene met a young, relatively unknown Canadian magician named Doug Henning when Henning played a variety bill in Bay City in 1971. “We went out for coffee after the show, and although we had just met, he accepted my invitation and spent that weekend at my place before driving back to Toronto. That was the first of a number of back and forth visits between us over the next three years. Eventually, I taught Doug the torn and restored newspaper,” Gene said.

After years of study of magic, acting and mime, Henning eventually opened a magical play with illusions called ‘Spellbound’ in Toronto. “I had counseled Henning, and my input prompted character role clarifications in the play. It proceeded to break the house records set by ‘Hair’ at that theatre. Broadway show producers discovered him and brought him to New York. They wrote a show around Doug called ‘The Magic Show’. I was there for opening night, had a credit in the program and even got to attend the celebratory opening night party following the show. That was pretty special,” Gene said.

“Doug Henning put magic back on the public’s map. When ‘The Magic Show’ closed after four and a half years, it was the ninth longest running musical in the history of Broadway. Henning went on to do eight, hour-long specials on national TV between 1975 and 1982. David Copperfield could not have made it to magic superstar status if Doug Henning hadn’t burst down the door,” Gene said. “Doug frequently stated that one of his two favorite effects was my torn and restored newspaper. And he performed it using my patter almost word for word. It fit him like a glove. I’m very proud of that.”

There was no big-name magician who initiated Gene’s magic interest when he was a farm boy in northern Minnesota. It was his uncle who visited when he was eight years old. “He had a little coin trick you could buy in a magic store. I made him show it to me maybe 50 times, because I couldn’t understand how what he did was possible. When he left, he shook hands with me and left it in my hand. Now I had a trick. For Christmas, I got another trick. Then I found books in the library. There were no local magic stores, so I developed my own stuff. As a result, it’s different. Not necessarily better, just different. But now I can precede or follow anybody on a show, because nobody else does what I do.”

Since performance skills are as important for a magician as mastering the tricks themselves, the young Gene also spent lots of time performing for his big family. “Dad was one of 17 kids. I had 63 first cousins. Every Sunday was visit-relatives day. So I started doing magic at these family things. That started my performance career,” Gene said. He attended and competed at his first magic convention while in graduate school at the University of Texas at Austin and won the originality trophy for his newspaper act. Over the years, he’s been awarded seven first-prize trophies in magic competitions and been nominated for two Academy Awards by the Academy of Magical Arts in Hollywood.

After six decades of magic, Anderson said that “Of course, it’s still fun! Because you get to make an audience laugh and applaud!”