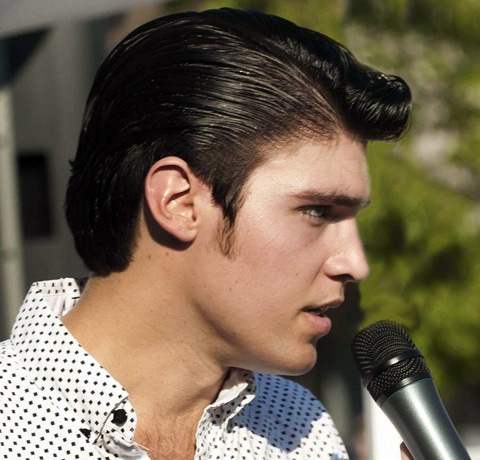 He grew up for the first 13 years in a small farming community in the Saginaw river valley. Jake lived, worshiped and attended school in St.Charles, Michigan. Life was pretty simple with a go-cart, shooting guns, playing with his dog, and working on old cars in the garage with his Grandpa. An Elvis fan since 6 or 7 years old, his interest in Elvis came when his Grandparents acquired the internet. Listening to an internet 50’s radio station when the Elvis song “Hound Dog” came on, he was hooked.  Jake began buying Elvis CDs and watched them in any moment of spare time.

At the age of 13, Jake made an important move North to Bellaire, the same as Elvis did from Tupelo to Memphis all those years ago.  This move proved to be a turning point, and the doors of opportunity were soon opened for Jake and his career as an Elvis tribute artist.

After singing for friends and family, in late summer of 2008 Jake started performing for the public. Since then he’s performed for audiences of all sizes, sell-out shows, and major competitions like the Saginaw Kingfest where he won the Early Years contest in 2009 and was awarded the King of Saginaw title for 2011!  Jake has the distinction of being the only King of Saginaw who has won both the Early Years and Concert Years contests in the competition.

Later in 2011, Jake competed at Branson, MO and Tupelo, MS in the Ultimate Elvis Tribute Artist preliminary rounds and qualified to represent Windsor, Ontario when he competed at that contest in June 2011.  Jake was one of only 26 qualifying tribute artists at the 2011 competition in Memphis.  In April 2013, Jake was awarded 2nd place in the Branson Elvis Festival in Branson, MO.

Jake has performed four SOLD OUT shows at the Bay City State Theatre, with two of those sellouts in the same year, 2013.  No other performer has accomplished this at the theater.

Jake is currently enrolled in the Business Management program at Northwestern Michigan College in Traverse City and is also interested in radio communications.  He recently formed the blues band, Mean Jean, with musicians from the Bellaire area.

APPRECIATION
Jake would like to thank his parents, Sherri and Steve Slater, and all other family, friends, fans, fellow tribute artists, and professional contacts that support his career.

Our Elvis can add some FUN and PIZZAZZ to your Wedding or Other Event!

Recently Rusch Entertainment arranged to have our Elvis act sing to the bride, Jasmyn, at the Odawa Casino Resort. It was a surprise for everyone except the bride, her mom and the groom! 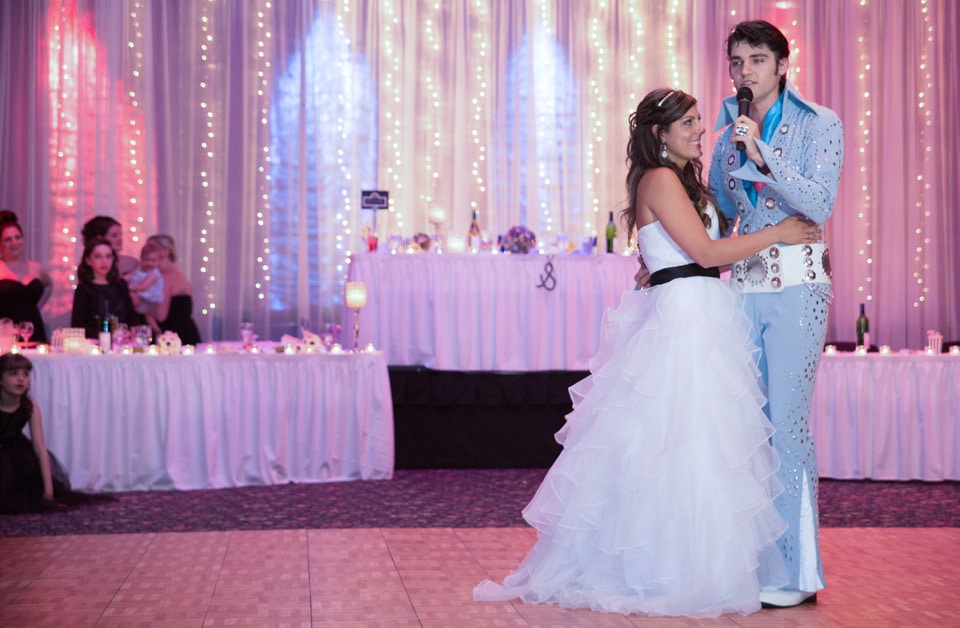 After dinner, we brought out our Elvis to surprise the guests and sing to the bride and groom at the Odawa Casino Resort Petoskey!  Jasmyn loved the show: “Jake was AWESOME! We were VERY happy with his performance..I’d recommend him to anyone :)”  Thanks!
Jasmyn