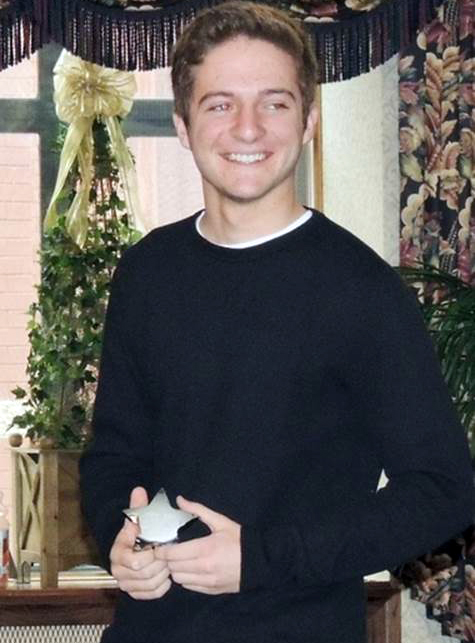 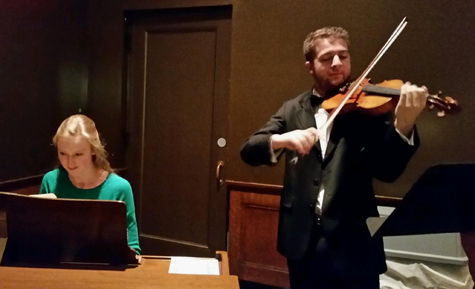 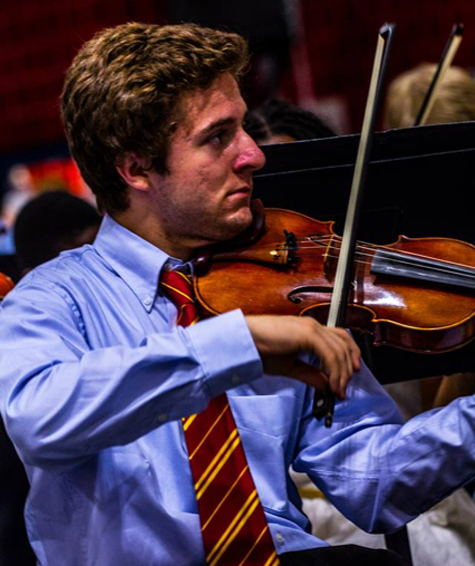 Violinist Nathan received an engraved star and $500 as the Saginaw Bay Symphony Orchestra’s 2013 Young Musician of the Year.

SAGINAW, MI – When Nathan entered the Saginaw Bay Symphony Orchestra’s first Young Musician of the Year competition in 2008, “it was an experiment,” said the Heritage High School junior.

“I was only 12 but I thought I might as well try. Last year, I really thought I was going to win.”

But three times’ the charm for the son of pianist and composer Catherine McMichael and violinist Rod Bieber of Saginaw Township. Late Wednesday afternoon, he received an engraved star, a check for $500 and the opportunity to perform the final movement of Brahms’ Sonata No. 3, the piece that won him top honors this year, at the orchestra’s “Russian Milestones” concert Saturday, May 4, at the Temple Theatre.

“He has really come into his own,” SBSO executive director Dan McGee said of Bieber. “There’s a maturity to his music now.”

“I have no musical ability whatsoever but I thought they were wonderful,” coordinator Janie Gugino said of the entries.

Earlier this year, Nathan was named a Michigan Youth Arts Distinguished Scholar and in early May will join nearly 1,000 student-artists at three-day festival at Western Michigan University in Kalamazoo.

Before then, he will perform with the Saginaw Bay Youth Orchestra at 3 p.m. Sunday, April 28, at the Temple Theatre, directed by his father and James Hargett.

“The Brahms piece really shows your virtuosity,” Nathan said. “It was almost impossible to play but I worked on getting better. It was my mother’s idea and when we played through it once, it was so powerful, so loud and so cool. This year, I gave it my most.”

“Nathan had so many different experiences this year, performing with Mike Brush and in the youth orchestra, playing gigs with groups like the Girls of Grace at their show here,” said his mother. “He went to a new summer camp, too, the Lutheran Summer Music in Decorah, Iowa, and it brought a new perspective to his music.”

Or maybe his secret is practice sessions that began on Aug. 19, 2001, and continued for more than 4,000 consecutive days.

Once there, he checked out the UCLA campus, where he’d like to pursue a degree in composing and film-scoring.

“I want to perform music but I don’t know about being a soloist,” Nathan said. “I’d like to be part of a good orchestra and still have time for composing.”

Nathan plays with organ, piano, or even guitar. Vivaldi, Canon in D, Bach Air, all of the classics for weddings!